During Q3-2017, several deliverables were uploaded. These belong to WP2 – WP7. A full list, including links to all the public deliverables that have been posted until now can be found here: http://www.nlafet.eu/public-deliverables/

NLAFET sent several participants to PPAM 2017 (September 10-13, 2017), where they presented some of their ongoing research.  Persons in bold made the presentation at the conference. On the Tunability of a New Hessenberg Reduction Algorithm Using Parallel Cache Assignment – Mahmoud Eljammaly, Lars Karlsson and Bo Kågström Blocked Algorithms for Robust Solution of Triangular Linear Systems – Carl Christian… Read more »

Working Note 12: Second Workshop on Batched, Reproducible, and Reduced Precision BLAS, Sven Hammarling and Working Note 13: Reducing the communication and computational costs of Enlarged Krylov subspaces Conjugate Gradient, Laura Grigori and Olivier Tissot, have been uploaded and can be found on the NLAFET Working Notes page.

The citation for his nomination reads; “Bo Kågström is Professor of Numerical Analysis and Parallel Computing and Director of High Performance Computing Center North (HPC2N) at Umeå University. Kågström has 25 publications in SIAM books and journals. He was a corresponding editor of the SIAM Journal on Matrix Analysis and Applications, was awarded the SIAM/SIAG Linear Algebra Prize in 2000,… Read more »

Department of Computing Science at Umea University, Sweden invites excellent candidates to apply for postdoctoral and PhD positions. The successful candidate(s) will join NLAFET, which is one of the high-profile extreme-scale computing projects funded by the European Commission within the recent FET-HPC call under Horizon 2020. NLAFET is coordinated by Umea University with international partners from INRIA (France), University of… Read more »

We are looking for a talented and enthusiastic researcher to join our Numerical Analysis research team within the STFC’s Scientific Computing Department for a three year period. The team is internationally known for its research into numerical linear algebra and optimization. The role involves both algorithmic research and the translation of this research into software. You will be working in… Read more » 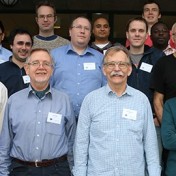 The NLAFET kick-off was held at the MIT building, Umeå University, Sweden. There were participants from all four partners. The conference was organized jointly by the Department of Computing Science and the High Performance Computing Center North (HPC2N). At the conference, the research project and its various components were presented and discussed. A key challenge for NLAFET, and for all… Read more »